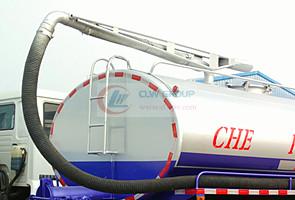 In terms of the shape of the tank, the vacuum sewage suction truck adopts a circular tank body, and the fecal suction truck adopts an oval turtleback design. Although the two kinds of tank bodies are different in shape, they both have the advantages of good stability and not easy to deform;

Both sides of the upper part of the vacuum sewage suction truck and the fecal suction truck are welded with safety guardrails, which play a role of safety protection when the staff walks on the top. A reinforcing plate is welded on the inner wall of the cylinder at the insertion end of the suction pipe inside the tank to prevent the corrosive liquid from impacting the tank for a long time and causing premature damage to the tank.